The Principality Of Sealand

Located in international waters, on the military fortress of Roughs Tower, Sealand is the smallest country in the world. Really!

The country‘s national motto is E Mare, Libertas (From the Sea, Freedom), reflecting its enduring struggle for liberty through the years. Sealand has been an independent sovereign State since 1967.

The Bates family governs the small state as hereditary royal rulers, each member with his, or her, own royal title. Sealand upholds its own constitution, composed of a preamble and seven articles.

Upon the declaration of independence, the founding Bates family raised the Sealand flag, pledging freedom and justice to all that lived under it. Following this, Sealand issued passports to its nationals, minted official currency and commissioned its own stamps.

During the Second World War, the British government built several Fortress islands in the North Sea to defend its coasts from German invaders. Some of these forts were built illegally in international waters. 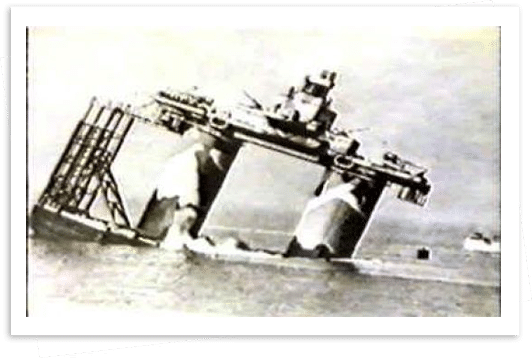 One of these illegal Fortresses, consisting of concrete and steel construction, was the famous Fort Roughs Tower, situated slightly north of the estuary region of the River Thames, on the east coast of the United Kingdom.

In contrast to the original plan to locate the tower within the sovereign territory of the UK, this fortress was situated at a distance of approximately 7 nautical miles from the coast.

This is more than double the then applicable 3 mile range of territorial waters. To put it briefly, this island was situated in the international waters of the North Sea.

The forts were abandoned in the early 1950’s and, due to their illegal construction in international waters in a time of world crisis, they should have been destroyed, to comply with international law.

Except for the aforementioned fortress, similarly located fortresses were subsequently pulled down. The result of this was the portentous uniqueness of the fortress.

Fort Roughs Tower, situated on the high seas, had been deserted and abandoned, res derelicta and terra nullius. From a legal point of view, it therefore constituted extra-national territory.

You can show your support for Sealand independence for the years to come, by registering for a Noble Title and becoming a Lord or a Lady.

Sealand also offers ID cards, and the chance to own a piece of our territory.

Other official Sealand products are also available for sale on the Ofiicial National Website: https://SeaLandGov.org

Richard Neal, from Charlotte NC could attempt something similar right here off of our coast but we don’t think he has any such intentions. Read our related article about Frying Pan Tower which lies about 32 miles off of our coast here: