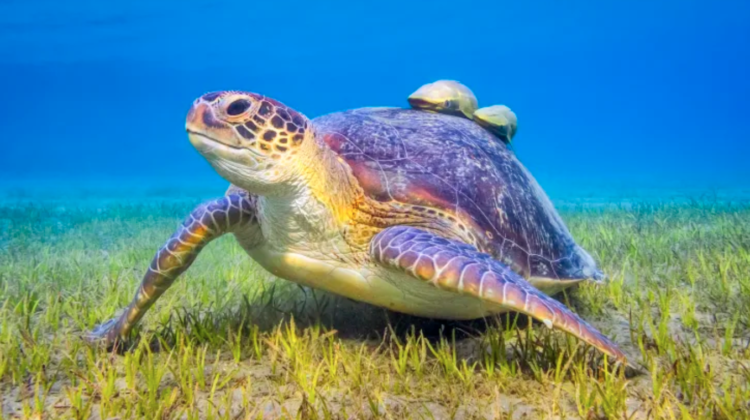 Sea turtles live in waters all around the world (except for the planet’s extreme north and south regions) and live as long as 80 years. There are seven species of sea turtles, and six of them—green, hawksbill, Kemp’s ridley, leatherback, loggerhead, and olive ridley—are listed as threatened or endangered. The flatback, found only in the area around Australia, is considered vulnerable by that country. Here are 20 other things you might not know about sea turtles.

1. Hawksbill Turtles Are Named For Their Jaws.

Hawksbill turtles have raptor-like jaws to reach hard to get to places in coral reefs. Their favorite food is sponges.

Adult greens are the only herbivorous sea turtles, eating seagrass and algae.

Leatherbacks eat jellyfish and other soft-bodied animals and have stiff spines in their throats to help them swallow this slippery prey.

Olive ridley turtles practice nesting in large groups, known as “arribadas.” While solitary nesting has been documented in as many as 40 countries, this spectacular event is seen in only five: Mexico, Nicaragua, Costa Rica, Panama, and India. Arribadas can include as many as 200,000 individuals.

For decades, scientists had no idea where Kemp’s ridley sea turtles nested. Then, at the 1961 meeting of the American Society of Ichthyologists and Herpetologists in Austin, Texas, biologists saw a home movie made in 1947 by Andres Herrera. It showed at least 40,000 Kemp’s ridleys nesting on a beach on the northern Gulf coast of Mexico.

7. Kemp’s Ridley Turtles are Now Making Their Home in Texas.

To increase their population, a secondary nesting location was created for Kemp’s ridley sea turtles on Texas’s Padre Island National Seashore. Over 20,000 eggs were transferred from Mexico and released in Texas. In 1996, there were 369 hatchlings released; by 2013 that number grew to 11,369.

Recent studies indicate that the number of Kemp’s ridley turtles at the site of the Deepwater Horizon oil spill were considerably higher than previously thought, and some scientists became concerned the Texas nesting population will suffer because of it.

Sea turtle mortality in shrimp trawls was once a major problem in the Gulf of Mexico, but the introduction of improved Turtle Excluder Devices (TEDs) on trawl nets in the 1980s ago has drastically reduced the number of sea turtles killed.

Small-scale coastal gillnet fisheries, common in many countries, accidentally catch significant numbers of sea turtles, injuring or drowning them. But changing the type of bait or using ultraviolet (UV) light-emitting diodes can reduce the chances of capture, according to a 2013 study.

11. Sea Turtles Can Dive Very Deep, and Stay Under for Long Periods.

As reptiles, sea turtles breathe air, but they have the ability to remain submerged for hours at a time. Leatherback sea turtles can dive up to 3000 feet deep.

Sea turtles have been documented migrating vast distances. One was tracked traveling more than 9000 miles from Baja California to Japan.

13. A Dog was Trained to Sniff Out Clandestine Sea Turtle Nests.

While most sea turtle species nest at night, the Kemp’s ridley nests during the day, when winds quickly blow away the female’s tracks. This can make it difficult for Padre Island National Seashore staff to find nests so they can bring the eggs into a special lab to incubate. Donna Shaver, PhD, chief of the division of sea turtle science and recovery at the Seashore, trained her Cairn terrier, Ridley, to sniff out nests. Other dogs have since been trained to find sea turtle nests in other locations.

Scientists don’t know much about the early stages of sea turtle life. Given a hatchling’s small size and rapid growth, the usual ways of attaching tracking tags don’t work. But researchers found that a neoprene-silicone attachment on an acrylic base-coat—just like that used for fake fingernails—kept tags on for an average of 70 days, long enough to clear up a lot of the mystery of those lost years.

After the 2010 Deepwater Horizon oil spill in the Gulf of Mexico, scientists were concerned that sea turtles hatching on the Gulf beaches of Alabama and northern Florida would swim out into deadly oil. They launched a massive relocation effort, moving 28,000 eggs between June 25 and August 18 to Kennedy Space Center on Florida’s east coast. (The eggs were shipped via FedEx.) The rescue succeeded; in July, August and September, 14,000 hatchlings—mostly loggerheads—were released into the Atlantic Ocean.

Fibropapillomatosis is a chronic and often lethal tumor-forming disease in sea turtles. Recent research suggests that FP occurs more frequently in green sea turtles that forage in waters subject to eutrophication, or an increase in organic matter that leads to algal blooms. Stormwater run-off and other human activities contribute to eutrophication.

Plastic debris in the ocean poses a significant threat to sea turtles, with a 2013 study showing that leatherback and green sea turtles are at the greatest risk of becoming sick or dying from eating plastic. A 1993 study found plastic debris in the digestive tracts of 51 percent of loggerheads, and necropsies of dead turtles have found some with their entire digestive tracts packed with pieces of plastic bags.

Sea turtle conservation projects around the world rely on volunteers to help patrol nesting beaches, move eggs into protected corrals, and monitor the release of hatchlings. Volunteers generally commit for at least two weeks, stay in tents or cabins, and enjoy communal meals.

A female sea turtle returns to the beach where she hatched when it is time to lay her own eggs. Some species travel vast distances in the 10 to 20 years between hatching and first nest. Scientists generated magnetic fields in the lab and demonstrated that sea turtles have the ability to detect the Earth’s magnetic field and use it as an orientation cue. Article published originally on MentalFloss.com

Find Out Even More!

Our Sea Turtles: A Practical Guide for the Atlantic